Over 55s Out and about 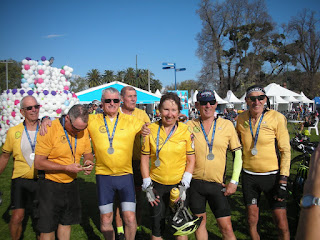 to a junket at Flemington racecourse to view the mighty 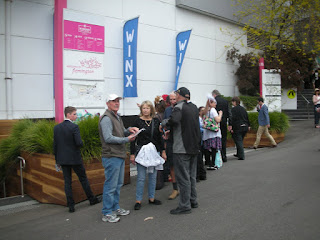 blitzing the opposition in the Malcolm Turnbull Stakes.  Being a week-end, the trusty steeds were taken along for the trip in case the opportunity presented itself for a ride.  The group wait patiently with their bike boxes 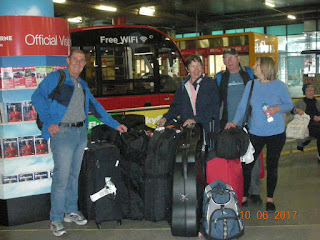 for the presidential limousine to convey them to their accommodation 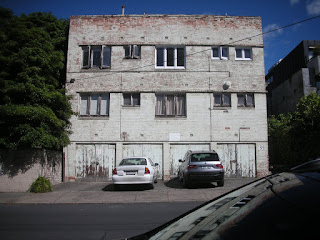 at the upmarket Yarra Hilton Hotel, followed by a sumptuous welcoming banquet 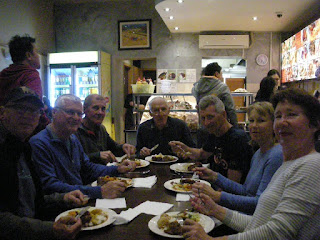 On Saturday a special express train to Flemington 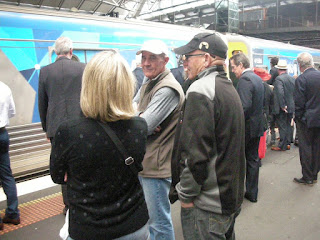 was arranged for the group and on their arrival there they were enthusiastically greeted by the Charlady of the Victorian Racing Committee, Dame, the Honourable Jemima Crudbelcher

all glammed up in her elegant, recherche´ hot pink slipover with matching bowling-green themed over-sized fascinator.  Ganners, by contrast, went for the more relaxed, casual style of matching shorts and ankle socks, teamed cleverly with a subtle off-blue trackie’ top.  Our President, meanwhile, is busily studying the form guide, completely ignoring the golden words of welcome pouring forth from the Crudbelcher’s honeyed lips.

The race was run and won, predictably, by Winx as we all looked on and cheered from the grandstand.  Winx was then interviewed and asked for her opinion on the gay marriage question.  “Speaking personally”, she said, “I wouldn’t mind being locked in a stall and horsing around with that cheeky young stallion over there, if you know what I mean, nudge, nudge, winx, winx, say no more, but some of these geldings don’t seem to mind who they’re shacked up with.”

Later, we watched in awe as Hon. Pres. collected 20 big green ones from the unfortunate bookie’  with whom he had bet  At a return of 2 cents in the dollar, the batteries in our calculator  burnt out trying to calculate his outlay.

Sunday morning saw us out and about in the streets of Melbourne promoting the O55 Cycling Club, pausing for a moment with not a clue where we were or where we were headed 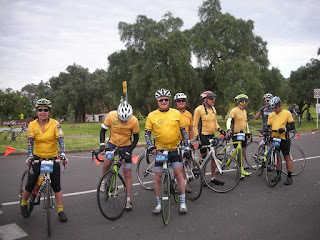 while GG studied his phone, desperately looking for clues as to our location.  At this point the Ride Captain of the Bay City Rouleurs (Nairn) approached our Ride Captain (PP) and invited us to join them in a little jaunt they were on.  So off we headed for Westgate Bridge and soon we were over that and flying past Werribee with a tailwind pushing us on and before we knew it we were in Geelong.  What awaited us there was a splendid morning tea 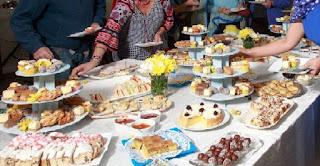 which we attacked with gusto, before heading down to Queenstown and finding ourselves provided with lunch. 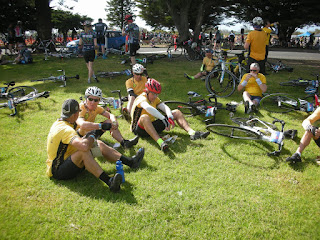 Puzzled by the provision of all this free(?) food we asked Nairn what the story was.  He said members were happy to fork out $50 or more for a ride as everyone in Victoria was flush with cash, thanks to the generous West Aussies who for years have been sending over mountains of money, honestly, he couldn’t understand why our pollies’ didn’t do anything about it, what a pathetic mob they must be, but in the meantime Vic. had no plans to raise charges or increase any taxes for the next 5 years, thank you very much, we love you guys. 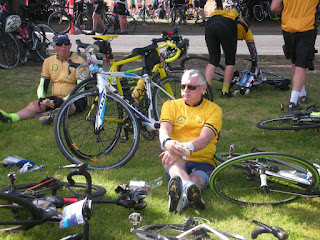 On hearing this the old silver fox himself contemplates the injustice of it all, while in the background PP nearly chokes on his sandwich.  When Hon Pres. was asked if we needed to pay for all this food he gave a non-committal grunt and would then neither confirm nor deny that our fee would be covered by the club.

We set off again but soon pulled up short when we hit a big stretch of water.  Nairn looked a bit embarrassed and said, “oops, I didn’t realise we’d come this far.” Like,  holy sh**, we thought, we need to be back in Melbourne in two days to catch our plane.  “Not to worry”, said Nairn, “I’ve got a mate with a boat.  I’ll give him a call and he’ll come and fetch us”. 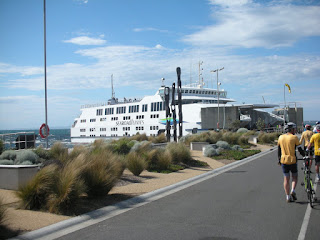 Which he did.
This guy is serious about his riding and likes to keep a few bikes on board to give himself a choice of steed when the mood takes him.  He also employs a team of security guards dressed in lycra to deter any would-be thieves 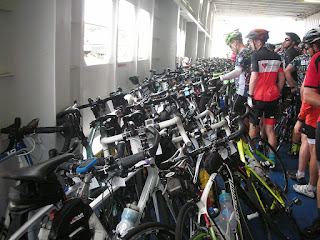 While crossing the bay, imagine our dismay when we came across this drunk and disorderly customer, 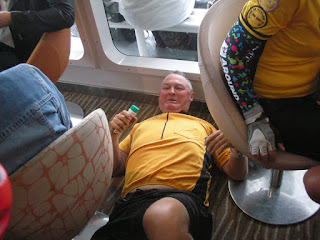 the ex-Chalkie from Kiama (since dismissed from his position as cleaner, we heard, due to impotence…..sorry….what was that…..oh!...indolence).   You may recognise him 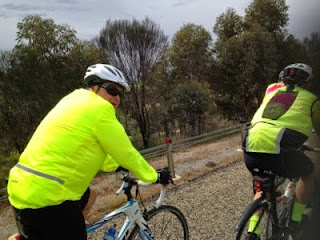 as the evil character some of us had to escort back across the Nullarbor in 2014.  Somehow, he’d appropriated one of our jerseys and planned to infiltrate our group and sneak back into Western Australia with us. Luckily we spotted him and managed to wrestle him into the hold and leave him chained there.


After this little drama, we eventually arrived at Sorrento and after pedalling a further 100km into a blustery headwind, made it back to Melbourne, 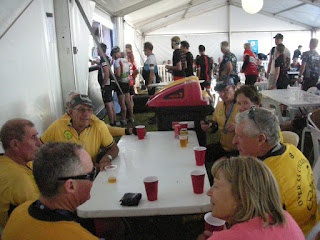 where it was celebratory beers all round.  So impressed were the Rouleurs with how we rode that they presented a select group of us 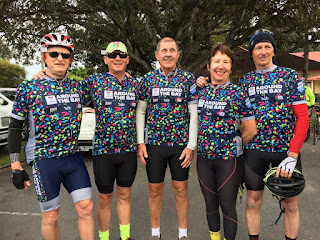 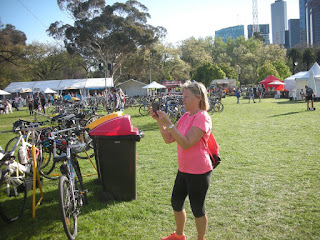 was commissioned to take our photo.

Monday was a day of rest and recovery before the flight home on Tuesday.  While some of the more refined culture vultures in the group took the opportunity to visit museums and art galleries, 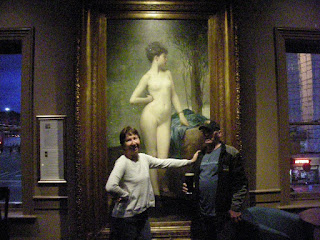 sensibly maintaining their hydration levels after the exertions of the previous day, others were off shopping in Chapple Street in trendy Toorak.  One headed for a dress shop to buy a dress (allegedly) for his wife and after receiving a knowing look from the sales lady that seemed to say “It’s ok, sir, we get plenty of YOUR types in here” and then being asked what his size was and did he want matching bra’ and knickers as well, he fled the premises in confusion and never stopped until he fetched up in a bike shop where he recovered his machismo by buying a bike he did not need.  Now his only problem is how to ship it home and slip into the bike shed along with the 17 other bikes without his now dressless wife noticing.

In summary, a great time was had by all and a resolution passed to encourage further president to president collaborations between major sporting organisations.